The three-day-long Mercouri/Xenakis project is an event organized by the Avant Art. Foundation to celebrate the Opening Weekend of The European Capital of Culture Wrocław 2016, which will include concerts, exhibition and a performance. Events, presented throughout 15th to 17th of January will be dedicated to the work of Iannis Xenakis – one of the most important contemporary music composers, and Melina Mercouri – Greek actress and the inventor of the very idea of European Capital of Culture.
The programme of the symphonic concert planned for the 15th of January, and directed by Ernst Kovaćić will be comprised of two Xenakis’ works: Ata and Jonchaies. This repertoire will be presented as well on the 17th of January during the gala concert of the European Capital of Culture Opening Weekend.
Graphic Music / Architecture of Sound by Wrocław-based project Phonos ek Mechanes (Cezary Duchnowski and Paweł Hendrich, with guest appearance of Kostas Georgakopulos and visuals by Bartek Szlachcic) is an electroacoustic programme, whose point of departure towards building its’ own work were the most characteristic attributes of Xenakis’ music.
The Karkowski/Xenakis agenda will be dedicated to the influence the Greek composer exerted on the work of the distinguished Polish composer Zbigniew Karkowski and will be performed by Anton Lukoszevieze and Kasper Toeplitz.
The Rebound A concert is going to be executed by Leszek Lorent (drums), and on the subsequent piece by Xenakis – Kassandra – Lorent will be joined by Maciej Nerkowski (baritone).
The Insenso, a cooperative spactacle by the Avant Art Foundation and Instytut Grotowskiego (The Grotowski Institute), will feature Alexandra Kazazou. The inspiration behind this piece lies in Melina Mercouri as an artist responsive towards social issues and genuinely interested in culture and politics.
A photographic exhibition related to Melina Mercouri and curated by Katarzyna Gołecka will be on display at Narodowe Forum Muzyki (National Forum of Music) from the 15th to 17th of January.
The artistic director of this project is Kostas Georgakopulos, well known as the head of Avant Art Festival and T-Mobile Nowe Horyzonty’s music scene organizer. The Mercouri/Xenakis project is organized by the Avant Art Foundation.
The organizer of the symphonic concert of Xenakis’ works at Narodowe Forum Muzyki (National Forum of Music) is the Avant Art Foundation.
The Insenso spectacle is a cooperative project between Avant Art Foundation and the Grotowski Institute. 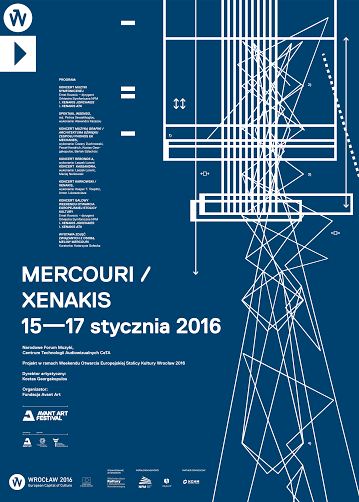