A project, a pilgrimage, a dialogue.

Performance Domicile is a project seeking to open creative links and dialogue between the people of Leeds, Lille and Wroclaw around the shared theme of home and border crossing by harnessing the power of the peddle during “Lille meets Wroclaw”.

The performer sits on a stationary bicycle attached to electric generators. She cycles part of the distance between Wroclaw and Lille. The generator will support an Internet connection between the three cities over which selected artists and events will present their responses to the project and the theme of home and border crossing.

Ben Mills is an artist and performer based in Leeds. He makes live performance projects as a solo artist as well as in collaboration with others. Ben also works as a freelancer maker and performer for devising performance companies. Ben’s interests include: language, reframing methods of labour, masculinity and truth.

Caroline Mirailles is a musician, performer and freelance producer, based in Lille and working everywhere on the world map. 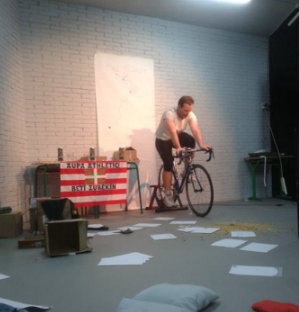